Congratulation to John Parker (120) of Cheltenham & County Harriers, the clear-winner of the 2018 race in 1 hour 16 minutes 42 minutes, and to Shona Crombie-Hicks of Tewkesbury Running Club (2), the first lady (11th overall again this year) in 1 hour 28 minutes 15 seconds. But a special thank you to everyone who took-on this challenging course to support the race.

Start of the 2018 Humph’s Hilly Half. Click on photo for a larger version.

This year we are supporting Kate’s Home Nursing, which provides palliative nursing care at home. Please help us with this mission.

Once again, the race followed a single loop, starting and finishing in Bourton-on-the-Water. A notable picturesque route through the pretty villages of Clapton, Sherborne, Windrush, Great Barrington and Great Rissington. We have a selection of photos and maps showing the course.

We would also like to say a big thank you to everyone that supports the race, including all of the runners and our many supporters, including Cotswold First Aid, Gloucestershire Highways and our sponsor John Hackling (Transport) Limited, that make the race possible.

The Hilly Half was introduced in 2004 to replace the Bourton Classic 15 mile race, which had been running for over 20 years.  So far it has proved to be a good move.

This year we are supporting Kate’s Home Nursing, which provides palliative nursing care at home. Please help us with this mission.

The results of the 2017 Humph’s Hilly Half are still available to download. You can also download a list of the prize winners and the team results. 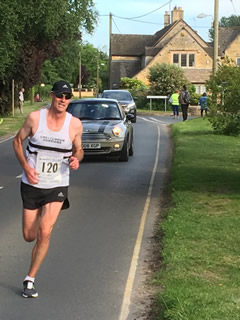 2018 Humph’s Hilly Half winner John Parker of Cheltenham & County Harriers, with a commanding lead at the finish. 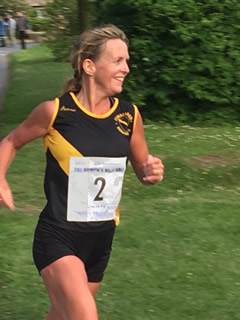 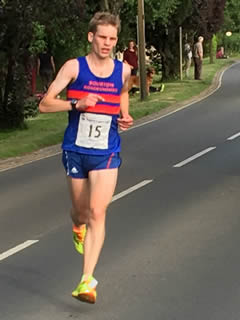 First Bourton Roadrunner to the finish was Tim Carter, 3rd overall, in 1:20:05.

This year’s race director is again Gill Carrick, who is supported by Steve Hudson as race entries secretary. Gill may be contacted at and Steve at