It was an emotional Neil Russell who arrived at Land's End yesterday afternoon after completing his astonishing 948-mile run from John O’Groats.

The 64 year-old former advertising executive from Bourton on the Water in the Cotswolds, who was diagnosed with Parkinson’s four years ago, had run a marathon a day for 36 days through all weathers and sometimes running until 11 o’clock at night. In the process, he’s raised more than £10,000 for Parkinson’s UK.

Neil Russell and his partner, Nicky at Land’s End famous signpost.
click on the banner picture to download a larger copy.

There were injuries and doubts along the way but after more than a month of battling torrential rain, blistering sunshine and busy highways using all seven pairs of running shoes he had with him, Neil ran the last 100 metres into Land’s End accompanied by his eight year-old granddaughter, Imogen.

Neil, who spent the last few days of his challenge inspired with dreams of downing a pint of Doom Bar beer and savouring a Cornish pastie, said: “There has been a wonderful welcome from my family, friends old and new and members of my running club who helped me train for this. It’s going to take me a day or so to process what has happened over the last 36 days.”

“Remarkably and despite my injuries, I finished today feeling really good. I don’t know where the strength and energy has come from.”

In the end, Neil’s journey was almost 1,000 miles because of the detours he took to avoid the heavily congested or very busy major roads in Scotland and the South-West. He was accompanied throughout by his partner, Nicky, who drove the camper van, plotted the routes, cooked the meals, washed the kit, fielded the phone calls and set up camp every night. “Nicky has been remarkable,” said Neil. “She has done so much to keep me on the road every day and been my biggest supporter.”

Some days, Neil ran more than a marathon and, in Scotland in particular, he was still pounding the tarmac as darkness fell. The miles have been long and relentless and he even celebrated his 64th birthday on July 23rd. Local running clubs came out to support him and for several stages he was accompanied by members of his local club, Bourton Road Runners.

It was, though, not surprising that the heavy mileage came with problems. Neil said: “I developed a compartmental syndrome injury in my leg coming through the Midlands and it’s had a big effect on me. Every footstep became painful.”

“I wouldn’t be honest if I said I hadn’t thought of quitting but I was never going to do it. One way or another and even if I had to crawl on all-fours, I was going to get to Land’s End. It got to me emotionally and sometimes, thinking too much about what was happening to me on those roads had a far-reaching impact on me.”

“The support throughout has been brilliant and especially when I came into Somerset. There were offers of tea and biscuits, help with directions and information on easier roads, donations thrust into my hands and the welcome in places has been remarkable. I even had a brass band play for me through one village.”

“It’s that type of support that kept me going when the going got tough. I’ve had donations from a pound to a hundred pounds and I know times are hard so everything has been very welcome.”

“I went into this knowing that it was going to be tough but not really appreciating how tough. I’ve learned that I’m stubborn and that I’ve got more resilience in the tank than I ever thought. I knew this was going to be tough but the accumulative effect of running those distances, day in day out wears you out. My body has constantly reminded me that I’m 64 and not 24 years-old and I’ve learned the hard way.”

Among the messages of support, Neil was praised by Dave Moorcroft, the former 5,000m world record holder and chief executive of British athletics. He tweeted: “Well done Neil. A truly wonderful achievement.”

Neil took up the challenge primarily to raise awareness of Parkinson's. He also wanted to raise money for Parkinson’s UK.

Before setting off from John O’Groats on July 18, he said: “Parkinson’s means that every day I take a lot of medication, I feel sick, I struggle to control my hand tremors, it’s hard to swallow and I struggle to write or concentrate.”

“But instead of thinking of what I can’t do with Parkinson’s, I try to focus on what I can do. I can train, I can run, I can sweat, I get stronger and my confidence grows. Every day, I tell myself, I’m going to run from John O’Groats to Land’s End. Why? Because I still can.”

At Land’s End, he was overcome at the completion of a challenge that began more than a year ago, when he decided to start training.

He added: “My message to anyone who has just been diagnosed with Parkinson’s is not to give in to it. Don’t let it define you. It is tough. I can only go with what works for me and sometimes I have days when it overcomes me and the whole thing gets to me but you just have to write that day off as a bad day. I just refuse to let it dictate to me how I live my life. I am in control.”

Parkinson’s is the fastest growing neurological condition in the world and, currently, there is no cure. In the UK, there are around 145,000 people already living with Parkinson’s. There are more than 40 symptoms from tremor and pain to anxiety but the condition affects everyone differently.

To donate to Neil’s fundraising, visit his JustGiving page

To find out how to fundraise for Parkinson’s UK, visit: parkinsons.org.uk/fundraising

Neil completed his astonishing 948 mile run in 36 days. Among the messages of support, Neil was praised by Dave Moorcroft, the former 5,000m world record holder and chief executive of British athletics. He tweeted: “Well done Neil. A truly wonderful achievement.” 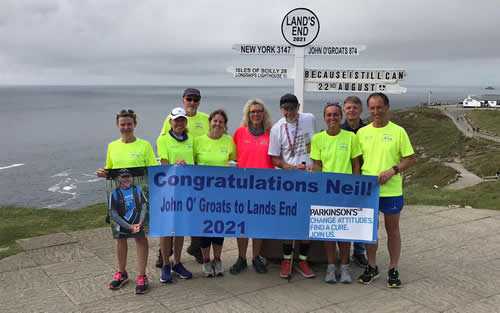 He was running to raise awareness of Parkinson’s, and also wants to raise as much money as possible for Parkinson’s UK. 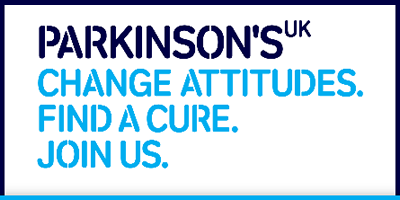 Catch up with more details about Neil’s epic journey, on our JOGLE page, which features radio interviews, podcasts and video dedications from a number of British athletics’ legends.